Two books found me. One took me back in time with black-and-white images of a city during a decade I often think about. The other informed me of  “what might have been” by showing me in text and color images of what eventually became reality for a river. Both books, separately and together, are about Maine. 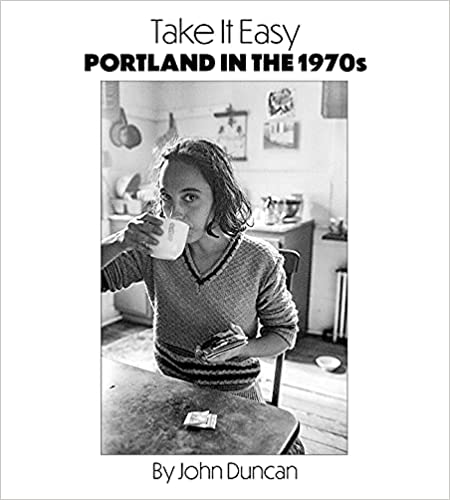 A photograph can be powerful. Without words, a visual image snapped at a specific moment in time captures that time. It also captures both the subject and the photographer taking the image or, better yet, “making” the photograph. In the wonderful book, Take It Easy – Portland in the 1970s, photographer John Duncan’s work reveals an artful focus on both place and person during a decade of pure change, not only of Portland but the entire country.

Duncan’s collection of back-and-white negatives captures Portland — specifically Congress Street — during a decade that saw change as a constant. The book of photographs is arranged in four sections: family, places, memories and work. The 130 images showcase a talent Duncan was perhaps unaware of, because the photos feel as though a simple, human interaction of sorts has taken place. The camera, the photographer and the subject are communicating to one another, as if a casual conversation is happening on a street corner. Then, with the click of a shutter the story is revealed.

Duncan, now retired, is surprised at the notoriety this collection has brought him yet remains humble in retrospect. Never professionally trained, Duncan was a cab driver simply snapping photos of what he saw. The photos accumulated, and then a conversation turned into a professional collaboration with Islandport Press.

These are powerful photos of common moments in time that captured the essence of a place, a city’s cultural presence in time. And as we know all things move forward; the future interceded; change continues for the city, while Duncan’s snapped frames of time will linger in the ethos of its past.

Rivers abound in Maine. One of those rivers is the mighty Penobscot River. Its history is as varied as that of Maine itself and beyond. In Peter Taylor’s book, From the Mountains to the Sea, a journey of restoration is explored in words and photos, culminating in an unlikely collaboration between people and organizations. 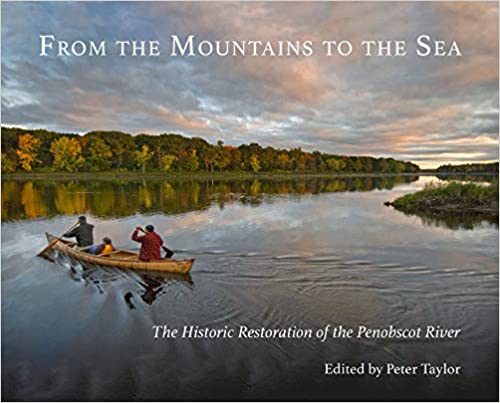 One June day in 2016, an Atlantic salmon made its way upriver through the town of Howland, bound for spawning grounds that had been blocked for 200 years. This single historic event came on the heels of a lot of work involving the innovative removal of dams with no net loss of hydropower. It also involved many people and organizations from diverse backgrounds coming together to make a dream into a reality.

Taylor is president of Waterview Consulting, an organization that helps clients advance environmental initiatives. Before that he worked as a travel magazine editor, university science writer, freelance writer and photographer.  He has degrees in biology and ecology, and for more than 20 years he has specialized in telling stories of ecology and conservation.

The Penobscot River is a legendary river. Logging camps once lined its banks; Indigenous people then and now hold the river in reverence. It not only is a place for them to fish, but it is a spiritual place that holds their 10,000 year-old story as a people together.  Thoreau paddled its west branch, and in doing so, learned as much about the river as he did about the Native Americans who lived along it.

“A long time ago, The People lived along this river, as we still do now. We take our name ‘Burnurwurbskek’ from a place on the river, and later the entire river took its name from us.” — Butch Phillips, Penobscot Tribal Elder

Over decades of development, the river declined. Fishing grounds went silent as hydroelectric dams were built. And then in 2001 an unlikely alliance of organizations and people came together. The Penobscot Nation working with the Atlantic Salmon Federation, Natural Resources Council of Maine and The Nature Conservancy acquired and removed human-made dams allowing the waters to run free. This is their story of how they did it.

Reading this book was as if I was in a birchbark canoe seeing the yesterday of a river from a new perspective all because of like-minded people devoted to a single purpose — rescuing a river. I float within its current, and as I move with it, I can see the river move backwards in time as fish and other wildlife return, as life returns. Restoring something back to its original essence is a beautiful thing, and this book captures the spirit of it all.

So whether you are looking to step back in time with images that showcase the essence of life in Portland during the ’70s or to experience a historic project that will have lasting impact on the future of flora, fauna and the people living along the Penobscot River, both of these books should be your constant companions on that journey.

From the Mountains to the Sea – The Historic Restoration of the Penobscot River By Peter Taylor. Islandport Press, 2020, softcover, $24.95