Sharing a distant horizon with a German submariner

His words were whispered. Caressed by the waves, words tumbled and folded upon themselves. With each word spoken, I imagine a memory came back to him, a lost orphan searching for home on the crest of a wave. I slowly moved closer, listening, hoping he would repeat the words.

The rock-bound coast of Maine is exquisite, especially on a bright day. The sky is blue, and the waters off the coast bluer. But the waves and crashing surf are the stars of any day, especially when one recalls something memorable within them.

It is 1989, Schoodic Point, a rocky promontory of land north of the high traffic area known as Acadia National Park and the tourist packed town of Bar Harbor, has some of the best crashing surf in the state. This piece of granite is also part of Acadia National Park, but sees fewer visitors, making it a prime spot for those seeking a little more privacy while taking in the spectacular views.

On a large expanse of red and brown granite there are plenty of spots to take photographs, sit, relax, close your eyes and listen as the world comes to you one wave at a time. Or maybe stand on a ledge and look into the Atlantic, see the years come back as they roll in on breakers and, perhaps, remember distant days as a German submariner.

“It sure looks different from here,” he said. The words held their distinct tone and accent. His gaze was fixed, his body statuesque, a marble edifice on granite, fixed and determined. His face was a sponge of emotion taking it all in, and, gently squeezing out the last drops of seawater and memories of days from so long ago.

They were called U-boats, and during the Second World War, especially near the end, many of them plied the Atlantic waters off the coast of Maine. Stealthy and fast, those silent warriors of metal and flesh carried devastating power to a war that both frightened and brought a nation closer as people fought tyranny and the spread of evil in Western Europe. 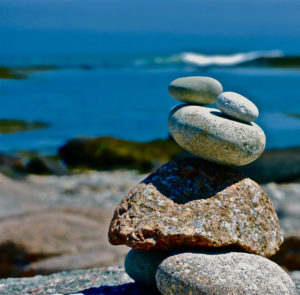 I stood there for a moment, not sure if I was to respond, or if he even meant for me to hear his words. But he said them again, and then looked at me. I asked him what he meant and when was he here last. He told me it was 1945, and he was all of 20 years old on a German submarine off the coast in this general vicinity. He laughed, saying, “They really never told us much, where we were or even where we were going, but I now know it was somewhere out there.” He pointed a bent finger to the horizon and inhaled a long laborious inhale, the kind we all have when we are about ready to let something go.

The mission constantly changed from day to day, he recalled. He remembered maneuvers set and suddenly altered. The boat’s course constantly changed. “We weren’t even sure sometimes what day it was,” he said, with a smile.

“Those must have been scary times, for both sides,” I replied.He nodded in agreement and said, “Yes, they were, but that is all in the past now. Those days have rolled over and are now giving us this moment, right here, today. Just look at the beauty that is out there. You can touch it, it’s real.”

As others around us snapped photos of the surf, children were jumping from ledge to ledge and picnickers lounged. Amidst all of this, two people, far removed by age and circumstance, took some time, and together shared a moment. I backed away and said goodbye to myself as he continued his long stare into the horizon. He quietly dismissed me from the conversation, an etiquette of a silent good-bye between two people sharing a piece of granite that for all of two to three minutes was home to both. He now returned to the sea.

From a distance, I watched him gaze out at the water surrounded by waves and bathed in salt spray. With each breaker rolling in against the granite ledge he was standing on, I could see his countenance become lighter, as if the memories were being let loose, a great big exhale, if you will, as he let them all go. I imagined that this was a new day for him, an epiphany of sorts, with baptismal waters from the sea running down his face and grace arriving with every crest and crash of the surf. He was catching waves one at a time, in his thoughts, his dreams and his hope for a very good tomorrow.

On May 7, 1945, four German U-boats patrolling the Gulf of Maine surrendered at the Portsmouth Naval Shipyard in Kittery, the largest American base on the Atlantic coast at that time. One was kept on the Piscataqua River, and it was said that thousands of Mainers traveled many miles to come and see what had long been haunting their dreams.