Crows, ravens and other avian delights

You hear them before you see them — usually early morning, well before the time you want to get up. One calls, another answers and just like that it’s a conversation in prime numbers with more voices joining by the minute. Crows, ravens and other avian delights are something I never pondered until I arrived Downeast. 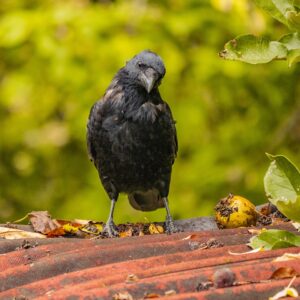 Where I lived in Pennsylvania there were of course many birds — cardinals, blue jays, robins, and blackbirds — but they were a part of the landscape rather than nature or life. Here Downeast, birds are life. Some provide useful information as weather prognosticators, others provide that proverbial morning wakeup call and still others are here, then gone, but you know they’ll be back and that brings some comfort.

Noted biologist Bernd Heinrich knows crows and ravens. He has lived with, studied and written about the bird family known as corvidae or corvids for short. He, along with other professionals, believes crows and ravens possess what psychologists term “theory of the mind,” which is the ability to infer the intentions of other animals and humans.

This ability supports a wide range of behaviors observed in corvids, such as playfulness and mischievousness. Crows specifically are known to bring gifts in a reciprocating effort to thank those who have benefited them directly. I never truly appreciated the intelligence of crows and ravens until after reading Heinrich’s books and living here Downeast.

Closer to home, my friend Larry has a family of crows keeping him company for over 30 years. Old crows die, young ones take their place and Larry, well, he keeps saying hello and offers them treats almost daily. They talk before and after they arrive, and if he’s not paying attention, they’ll yell at him, and Larry listens.

“My crow friends recognize me when I’m in the woods near my home, often coming to sit and observe whatever I happen to be doing,” says Larry. “They’re good friends, they don’t ask much of me and make every day more pleasant with their presence. Both crows and ravens are pretty much a constant presence in my yard. At this point it’s safe to say they feel secure here.”

Years ago Larry had a raven hanging around his property. The bird would follow Larry and his dog whenever they hiked in the woods behind the house. So he decided to name the raven Thor. “One day my then wife was weeding our garden when she came into the shop to get me. She told me that ‘my bird’ was frightening her. It seems Thor was in a nearby apple tree and was croaking while vigorously shaking the branches. Clearly, he was displeased by her presence. I went out with his treat, he took it and there was peace in the yard once again.”

Another story Larry shared happened when a red squirrel gained entry to his house. Knowing his dog and cat would destroy the place trying to catch it, Larry quietly dispatched the squirrel and placed it outside behind the house. He watched as a number of crows came down, encircled the dead animal and one-by-one tentatively stepped forward, then back, taking turns waiting to see who would be the first to take a bite. This went on for about five minutes until a raven perched high above, growing annoyed with it all, had had enough, swooped in and snatched the squirrel from the ground. The crows, stunned and bewildered, kept looking at each other wondering, “What just happened?” 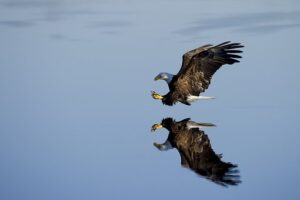 Eagles, ospreys and hawks remain a treat, even if I had to travel 600 miles north and east to experience. Glorious to watch in flight, these raptors are also lethal when they dive — talons splayed — along an invisible line of demarcation until they reach their prey. One October morning their prey unfortunately was one of my chickens. It was over in seconds; “Georgie” didn’t know what hit her.

If raptors are the silent type, then chickadees are the extrovert. Their song and manner are quite “Downeast like” — friendly and always interesting. These gregarious birds of white and black will dance and sing for food, approaching like a friend, but stealing like a thief, hence their black mask. 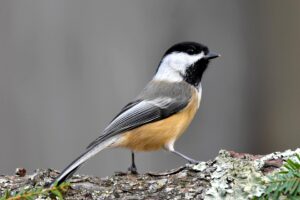 And probably the best show of all is when the hummingbirds return. In late April or early May there may be a knock at the window or a whizzing hum at your ear, then a small colorfully wrapped package of stillness perched on a feeder drinks its fill. These harbingers of summer are like clockwork. Their arrival also affirms an important message for us all, especially given our current “contained” condition, which is that life always returns to normal.

Downeast is a splendor any season of the year, but springtime for me — especially after the year we’ve just experienced — is something to behold. Whether watching the water, sky, the fields and woods, it all comes back. Everything returns to where it once was, begins again, starts anew. We get that second chance, and boy do we need one. 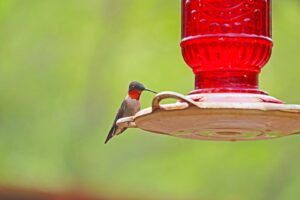