OK, so, yes, I admit it, I am a fan of Winnie the Pooh, and today as I write this, I am feeling somewhat whimsical and would like to lighten things up just a bit.

The lovable storybook character brought to life by A.A. Milne somewhere along the way seeped into my psyche and has been there ever since. Perhaps it was the videos we would slip into the VHS player when the children were little and watch countless times. Those videos and their slipcases, now covered in tape from corner to corner, are a trove of treasured memories for our family. 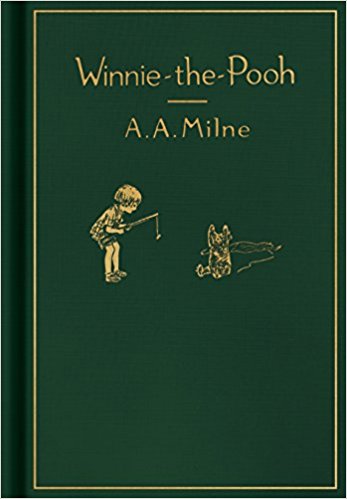 Today those subtle hints of philosophical thought that this little bear exhibits I find to be inspiring, and Piglet, well, there is more there than a nasally-voiced young friend of Pooh. Deep inside is a brain trust of ideas, thoughts and especially an attitude on how to treat others. Books such as The Te of Piglet and The Tao of Pooh are proof that I am not alone in my thinking. Within the dialogue of these characters and stories there are small snippets of enlightenment and a whole lot more going on than just some animals and their day-to-day life in the Hundred-Acre Wood.

A.A. Milne based his stories and character of Pooh on the teddy bear of his son, Christopher Robin Milne. The toy was first named Edward Bear, but his son renamed the bear Winnie after a Canadian black bear he would visit at the London Zoo.  The other stuffed animals — Piglet, Eeyore and Tigger — were also a part of the inspiration for the stories. The original toy bear is on display at the New York Public Library.

What does this have to do with Downeast, Maine?  I have found that living and working here offers less distraction and more time to think and reflect on a myriad of things life seems to bring our way. Behind my desk is a stack of books relating to the writing life and business in general, including the books I mentioned. As I started to page through one of the books, I found myself smiling and realizing the value of having the time to read and reflect on what I’ve read. While turning the pages, I also began to see similarities in these childhood tales, in real time, in real life.  It allowed me to take a break from the seriousness of the world as reflected in the daily barrage of bad news and just have some fun.

I wasn’t sure I would have found this moment if I were living any other place. This contemplative time to just sit back, smile and laugh is a gift that Downeast provides to me. I also realized these characters and their attitudes are universal and exist in just about every place in America, if we take the time and look for them. From the largest of cities to the smallest of hamlets and villages, the Hundred-Acre Wood and its occupants, all of them, are present in both the landscape of the place and in the people living there. Think about it. Don’t we all know of an Eeyore type of person or maybe someone with that whirlwind, non-stop chatter of Tigger somewhere in the clatter of our daily conversations?

In Winnie the Pooh I see a gentle soul who is willing to listen to others and is always hungry for food. He is an affable character, said to have “no brain” by his animal friends, yet he still exhibits some clever ideas derived from common sense and is always positive and forward thinking. “If the person you are talking to doesn’t appear to be listening, be patient. It may simply be that he has a small piece of fluff in his ear.”

Eeyore is the exact opposite. This old grey donkey with the gloomy disposition is always seeing the negative side of things, and has a glass-half-empty approach to life. “Wish I could say yes, but I can’t.”

The small and loveable Piglet is Pooh’s closest of friends, a best friend. With an unforgettable nervous giggle, this “Very Small Animal” is always trying to be brave and on occasion is successful. “Piglet sidled up to Pooh from behind. ‘Pooh?’ he whispered. ‘Yes, Piglet?’ ‘Nothing,’ said Piglet, taking Pooh’s hand. ‘I just wanted to be sure of you.’”

Then, there is the hyper, ever-moving and talkative character known as Tigger. This bouncing bundle of energy wrapped in orange with black stripes — the epitome of attention deficit disorder — is that larger than life character we all know and have in our own personal lives. “Well, I gotta go now. I’ve got a lotta bouncin’ to do! T-T-F-N: ta-ta for now!”

From his imagination Milne found a way to show that, no matter the different nature of people and their approaches to life, it all can work for the good of a place and for everyone living there. Milne was able to express his thoughts on the commonality of peoples’ differences purely based on his imagination and observations of his son’s interactions with his stuffed animal friends in beautifully told stories. With what I know of these characters and their stories, I can see it here Downeast also, and every now and then, I’ll take the time to appreciate it.

So, if you find yourself searching for the meaning of life, or simply looking for that misplaced smile, find a copy of a Winnie the Pooh book, or even an old video, and see what I am talking about. It’s all there: these delightful characters that we cannot live without and undoubtedly know as real people in the lives we are living today. Because when life throws the good, the bad and the sometimes questionable things at us, it will be the people in our lives that make it all so very interesting and undeniably rich every single day.