A Countryman’s Journal: Views of Life and Nature from a Maine Coastal Farm

I am now better for having read Roy Barrette’s observations of life lived on his coastal farm in Maine. The 77 essays in Islandport Press’s reprint of Barrette’s 1981 book, A Countryman’s Journal, provide a full circumnavigation of a life first realized and then lived to its fullest on a piece of Maine land that was both accommodating and now humbled by his presence. 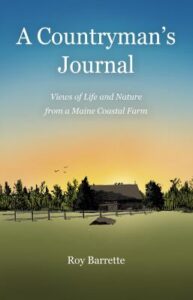 Leaving Philadelphia in 1958, Barrette and his wife Helen move to a rundown farm in Brooklin to make a life of quiet, simple pleasures. They succeeded in doing just that. Barrette’s attentive voice captures for us all his modest embrace of a place that continually gives back.

For 12 years Barrette shared that experience in his weekly award-winning column for The Ellsworth American and The Berkshire Eagle. These essays also made their way into DownEast and Yankee magazines. In addition to this book Barrette also wrote A Countryman’s Bed Book and A Countryman’s Farewell before his death in 1995 at the age of 98.

Like the writings of another famous Maine farmer, Barrette’s prose rings loud. In meetings over martinis to discuss current events, the finicky ways of farm animals or the seasonal machinations that are farm life, his neighbor E.B. White provided not only friendly advice but, also, another writer’s view of the world. What I would have given to be present with those two while they talked away the hours about the whims and ways of a world that stops for no one.

These essays are not a memoir of a person but that of a person’s relationship with a place — a coastal farm tucked between folds of wooded fields and the sea. The words take you there, sit you down on a rock or a stump amidst shadows of sunlight and fog trails and reveal the unfolding life of a farm, the farm Barrette named “Amen Farm.”

Covering topics of everyday joys, angst and uncertainties, his writings do not disappoint. Barrette is quick to the point, as is the case with most columnists knowing there is an editor out there somewhere, red pen in hand, counting words. For the reader, these essays flow without effort, telling not only a story but serving up a slice of Maine life as only a seasoned writer can do.

In the opening essay, “Life in the Country,” Barrette admits the life of a rural columnist is somewhat easy, in that the readers he hears from more or less want to thank him for his observations. Some do so by visiting the farm. They also will leave a bit of themselves in the process, which he knows will fuel the fire for more columns and in many ways reaffirms what country life is all about.

“People here are always giving each other something, without any particular end in view, because that is the way we live. We had a party not long ago at which we served mussels marinières. I was trying to figure out the tide so I could get some at low water, when a young friend showed up with a peck of them as a gift. I don’t know yet what I am going to do for him, but sooner or later some opportunity will develop.”

In “Property Lines” the land and where it begins and ends allow a philosophical outlook to rise for those who feel they must own all of the outdoors in order to keep others from owning land next to theirs. “Well, that’s one way of owning all outdoors, but I have a better way and it doesn’t cost anything. I just walk, and listen. What I take off the land is invisible. You can’t prove damages when all that has been stolen is the fragrance of the balsams, the autumn fire of the maples, the scream of the blue jay, and the whisper of the wind in the pines.”

And in “Pardon the Past — Give Grace for the Future,” Barrette speaks to our penchant to close out the old year by feeling we must make resolutions towards a new year. He even disagrees with Thoreau on this matter. “I am afraid I cannot agree. I have lived to be older than Henry was when he died and believe that had he lived longer he, too, might have thought differently. We countrymen, even when we grow old, still spring with the spring, and if we no longer make New Year’s resolutions it is not because we are unmindful of our shortcomings, but rather because time has taught us that it takes more than resolutions to gather figs from thistles.”

Having thoroughly enjoyed this book, I can now say that the shelf in my study devoted to books of and about Maine is complete. Barrette’s book is one of two bookends holding the stack up straight, like that of a rock wall that meanders unhurriedly through a Maine field. The other book is One Man’s Meat by E.B. White — two forever storytellers who both imbue a certain essence when it comes to a life lived in Maine.