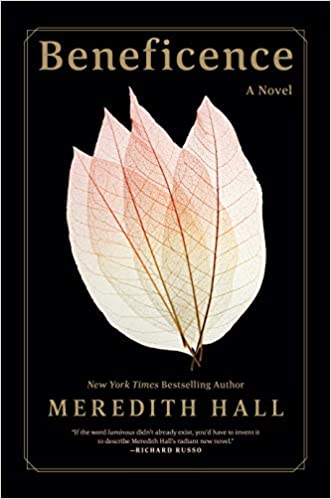 A review by RJ Heller

Family. Home. Perfection. Is there anything that relies on each other more to make a place a home than family? For the Senter family, their perfect world is shattered in one horrific moment by a tragedy that lies at the heart of Meredith Hall’s debut novel, Beneficence. Hall is an essayist, poet and now a novelist, sharing her time between California and Maine. Her 2017 award-winning memoir, Without a Map, was a New York Times bestseller.

The Senter family has lived and worked their land in Alstead, Maine, for generations. The valleys and hills and animals, the daily chores of gardening, milking the cows and the creek that runs through it all surround five lives breathing together as one, a family making a go of it just after World War II. For Tup Senter, his wife Doris and their three children, Sonny, Dodie and Beston, the world is shattered on one cold day in March. This tragic day will reside in each of them and tug at the very fabric of what makes them a family — love and trust in one another.

That day and the rest that follow will test the bond they have for each other as they separately deal with a loss that dims the family’s light. For Doris, her light almost goes out, changing everything going forward. She isolates and closes her door to what was once all she lived for — her husband, her children and the home they made together.

“It has been two days now. The noise of my wailing has finally ceased. Now we enter our new story. The other one is over forever.” — Doris Senter

Tup Senter knows the responsibility he has to the generations of his family that worked this farm before him. On a distant hill under the old pines, their gravestones look down upon his work as he tends the land and provides for a family that depends on him, even more so now.

Tup will flee to live a double life while still providing for his family, but for how long?  Dodie is both her mother and father. Being strong, resilient and smart, she becomes the maternal presence when her mother closes herself off from the world. Beston, the quiet one, fills his days with introspective thought, music and an unease that will eventually consume him if he does not leave. And Sonny — the oldest of the Senter children — his is the light that makes this family complete, and he is a daily reminder of possibility.

Spanning 18 years, Beneficence is told in four parts: Before, During, After and Here. All are rooted to that cold, windswept day. The incessant tapping of sleet against the windowpane reverberates throughout the story, a metronome keeping time as a family tries to move on.

In chapters that oscillate back and forth in narrative, Tup, Doris and Dodie tell the story, each unique in perspective and emotion. This is where the strength of the writing shines. Hall is a poet, so her choice of a word, phrase or emotive adjective is often perfect. The writing is ethereal, emotional, heartrending and heartwarming all at the same time. Such can be said of life.

This beautifully told story reminded me of a quilt being made, a family heirloom that is sewn by loving hands stitch-by-stitch. Its patterns are of family, its colors are of love and the light it holds constantly changes from shadow to bright white.

And like that quilt, the bond of this family is real.  Like when Sonny, just two years old, wants to see his newborn sister Dodie to hold her in his arms and welcome her into the family. “I have always believed that something stitched them together in that moment.” — Tup Senter

Loss, grief and guilt will test that bond, tugging and pulling at the stiches. But because of this family’s devotion to one another, the stiches refuse to yield. Instead, honesty, forgiveness and love will be called on to heal this family, each in their own circumstance, in their own time.

Together, they work to bring the light back into the folds of the fields, the farm and their home. And with the light comes grace from that stone marker now among all the others on that distant hill under the old pines. “We will ourselves to live this day grateful and unguarded. We decide. We make ourselves ready to participate in beneficence and goodness. There is no peace outside that.” — Tup Senter

This is a special book, nearly perfect. It is a story that lingers, and one that will remain with me for the remainder of my time in this world.